Prologue
by Rick Taylor (1999)
Once upon a time two of the best farms in Salt Creek township were located on the ridge just south of Chandlersville.  These were the Frazee and Moore farms.  These farms are the setting for the diary of 18-year-old Mamie Frazee who was visiting her relatives here in August, 1895 with her family.
Mamie Frazee's father, Nathan, was born and raised in Salt Creek township.  He was the oldest son of Lewis and Mary Jane Neff Frazee.  Nathan moved to Clark County, Missouri, in the early 1870s and married Nellie Reed there in 1875.  Their children were Mamie, Edna, Noila, Nathan (Natie) and Leila.
On their visit to Ohio they stayed at Lewis and Mary Jane Frazee's big frame farmhouse that stood on the west side of Big Muskie Drive in what is now a large wooded area just south of Chandlersville.
They visited back and forth with Nathan's sister, Catherine Moore and her husband Ai, and their children, Lewis, May, Ada, Lorena, Anna and Frances.  They lived one quarter mile south in what was later commonly known as the Moore sisters red brick farmhouse that is yet standing.
Another sister of Nathan's was Mary Eleanor who had married Robert Clapper.  They had a son, Ralph, at the time of the diary, and later had two more children, Hazel and Everett (Happy) Clapper.
Nathan had a younger brother, Lewis C., who is mentioned in the diary just once.  He was not in good standing with his father Lewis.  He had married Hattie Stanford at about the time the diary was written.  They had a son who was born and died in 1896.  Their other children were Goldie and Lewis.
Thus there were three generations of Frazees' with the name of Lewis.  Lewis (the third) never was married and thus the Frazee name wasn't carried on in Salt Creek township.
In Missouri, however, the Frazee name is still perpetuating.  Nathan and Nellie Frazee had a son named Nathan (Natie), and Natie had a son named Nathan.  His son and grandson were also named Nathan.  So thus far, there have been five generations in Missouri named Nathan.
This begins the diary of Mamie Frazee of Wayland, Missouri. 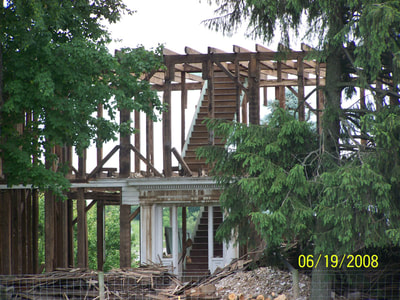 Remains of the Frazee Farmhouse (in 2008) 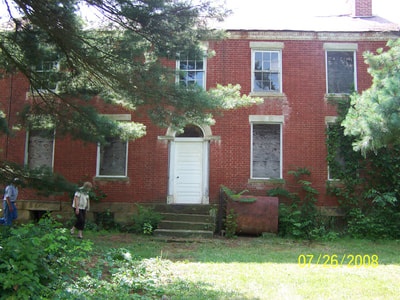 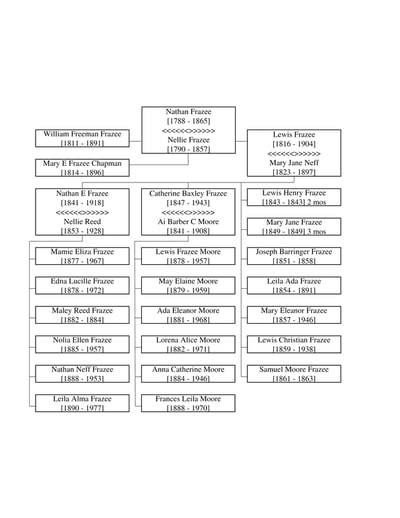 — Mamie Frazee
Epilogue
by Rick Taylor (1999)
Now for the conclusion of the story about the Frazee and Moore families. But first, how did the Frazees get to Missouri in the first place?
Lewis Frazee Sr. had an older brother, William Freeman Frazee, who went to Missouri in the 1830s and bought a large farm. Following the close of the Civil War, Lewis Frazee's son, Nathan, traveled to Missouri to visit his cousin Samuel, who lived next door to his father, William Freeman Frazee. When Nathan found out that they no longer wanted the farm, he made them an offer and they accepted.
In the meantime, Nathan met Nellie Reed, who was a sister of his Cousin Samuel's wife. They fell in love, and Nathan got a Missouri bride for his newly-purchased Missouri farm. Nathan died in 1918 and Nellie died in 1928.
One of their daughters, Mamie, who penned this diary, married Joseph M. Wood, and they had four children. They were June Wood, Lelia Cronyn, Mary Nell Hale and Prof. Joseph N. Wood. Their mother, Mamie, died in 1967 at age 90.
Mamie's brother Nathan (Natie) married Edna Eberheart, and they had four sons. They were James, Robert, Harry and Nathan. Nathan has a son and grandson, both named Nathan, living in Waverly, Iowa. Thus five generations have been named Nathan.
Even though the Frazee name continues to perpetuate out west, the Frazees have died out in Salt Creek Township in Ohio. Old Lewis Frazee lived to be 88, and he died in Nov, 1904. His wife, Mary Jane, had died in 1897. Lewis Senior's son Lewis Junior then got the farm and occupied it.
Lewis Jr. and his wife Hattie (Standford) raised two children, Goldie and Lewis Christian. Neither children ever married. Their parents died on the old Frazee farm, Lewis in 1938 and Hattie in 1942. Goldie died in 1946 and Lewis C. died in 1971 at 72.
The old Frazee house burned down after being burglarized in 1960. The whole farm has grown into a forest wilderness.

Now for the story about the adjoining Moore farm. It had once belonged to Nathan Frazee Sr. and then to Christian Neff. Then Lewis Frazee bought it back and in 1884 sold it to his son-in-law and daughter, Ai Barber C. and Catherine Moore. They raised five daughters and a son on this farm.
Ai Moore had a stroke in 1901 that left him partially paralyzed. He died in 1908 at age 69. His wife, Catherine lived to be 96. She died in 1943.
None of the five Moore sisters were were married, and they inherited and farmed the Moore farm their entire lives.
Anna Moore was the first to die in 1946. May died in 1959 and Ada died in 1968. The remaining two sisters then moved to Columbus where they died, Frances in 1970 and Rena in 1971.
Their one brother Lewis F. Moore, married Cleffie Jane Mansperger in 1902. They moved in with Lewis Frazee Sr. and took care of him until he died. Then they had to move out. They then moved into another house on the back of the Moore farm. In 1912, they bought a farm in Pleasant Valley in Perry Township.
They raised nine children there: Esther, Edna, Mildred, Mabel, Dallas, Delma, Marion, Glenn and Shirley.
Dean Stewart, the son of Esther Moore Stewart, bought the Moore sisters' farm in the early 1970s. He then bought the adjoining Lewis Frazee farm. Dean plans to restore the old Moore sister's brick house in the near future. And so ends the remarkable story of the Frazee and Moore farms and the 1895 diary of Mamie Frazee.
Frazee Geneology